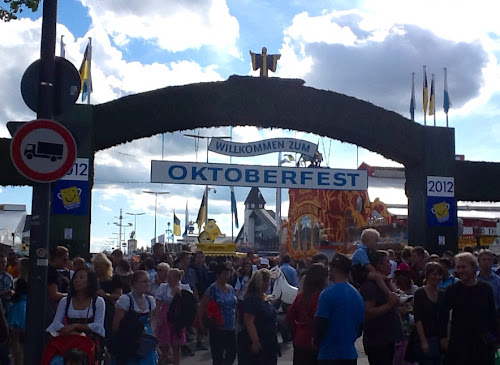 Oktoberfest takes place in Munich every end of September/beginning of October on the Theresienwiese, which is essentially a large fair grounds. Each of the six Munich breweries sets up an enormous tent, or Zelt, which is filled with rows and rows of tightly packed tables and benches surrounding a raised stage where bands play both traditional German tunes and familiar American pop music live all day. More tables are set up outside the tents, and then stationed throughout the Wiesn between the large tents are rows of pretzel, cookie, and sausage stands as well as the flashing lights of fair rides – roller coasters, giant swings, a carousel, etc. Inside each of the tents, it is almost (but not) impossible to find a seat. Of course, folks attending the Oktoberfest are clad in traditional Dirndl and Lederhosen.

In the day time, lots of families with children attend the Oktoberfest. Later at night, people pack the tent aisles and stand on the benches, a Maß in hand, dancing and singing along to the band’s loud music. The air is charged with excitement at Oktoberfest – Germans and Ausländer alike are enthusiastically drinking their beers, enjoying Bavarian food, and making friends with one another. I told a friend from Alabama that the energy at Oktoberfest is at a level that I imagine the energy to be like at the Iron Bowl, minus the fierce competition. Tons of fun! Here are some pictures:

And some photos of friends at the Wiesn: 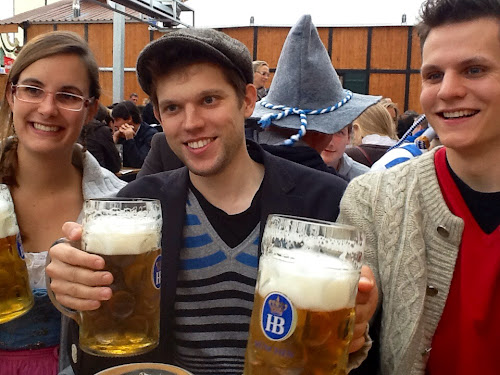 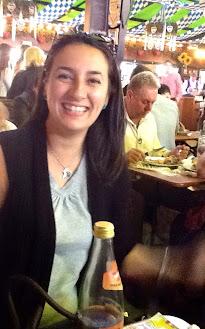 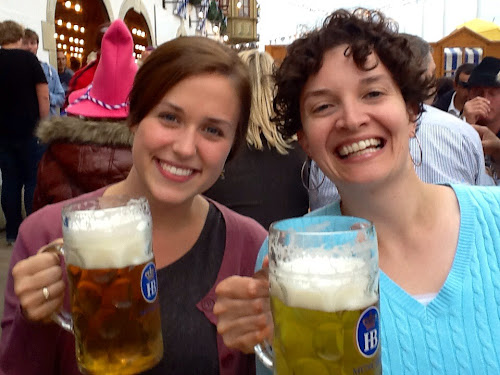 And I end with the words of a song, sung repeatedly at Oktoberfest: “Ein Prosit der Gemütlichkeit,” meaning “Cheers to…” Gemütlichkeit, which doesn’t translate into one English word, but roughly means coziness, friendliness, comfortableness, snugness, unhurriedness (according to German friends and Google translate). Yeah, I’ll drink to that. Prost!