One of the first things I did after arriving in Europe (actually five days after my arrival), was to pack up and fly to Barcelona to board Holland America’s cruise ship, the Nieuw Amsterdam. This is where my brother works! His performing contract began this past May and lasts through next April. Currently, they are sailing through the Mediterranean, and around the end of October, they will cross over to the Caribbean for the winter and spring. Tough life, eh?

We were able to work Patrick’s connections with help from his fellow cast-mate Joey, and I got to come sail the Mediterranean as a “Friend/Family on Board” for a week (i.e. for free!) Thank you Joey!!! I stayed below deck and had access to the crew areas, which was really cool. I loved seeing Patrick’s world behind-the-scenes. With my crew status, I attended a HESS (Health, Environment, Safety, and Security) meeting as well as a raft drill. Woohoo!

In general, I was able to kind of live in both crew and passenger areas. The biggest restriction to us was not being able to dine in the main dining room, but the performers (and I) ate in the Lido, which is great! 🙂

Sometimes Patrick had rehearsals, and I got to watch or play alone on the boat. Of course, I attended each of his shows. The first night was a short introduction to the cast and the entertainment offered on the boat. The next night, the four male singers performed Cantare – with awesome vocals! Later in the week, I saw two other shows – Listen to the Music (?) and Garage Band. The cast has so much energy and talent! It was great to get to know some of them too.

They didn’t have a show every night, so sometimes we just got to enjoy the cruise life! Playing Scrabble with Patrick and Joey in the Crow’s Nest was a frequent source of amusement. Some of the other entertainment off the main stage was really good. Patrick made reservations one night for the Tamarind, a Pan-asian style restaurant. It was delicious!

Life on the ship was great, but of course the highlight of cruising the Mediterranean is getting off the boat and exploring land! Here are the highlights, day-by-day:

Our first port was Cagliari on the island of Sardinia. We explored the port with a group of friends, winding our way up the roads from the sea to this high point. The city was really beautiful, and we had a great view!

Our next port was Palermo on the other island of Sicily – which lies off the Italian boot’s toe. We had less time in this port because of my drill that day, so we didn’t get to see very much. We did enjoy some good food and took in some nice old-world architecture.

As we made our way up the west coast of Italy, we ported next in Civitavecchia. Patrick had to stay near the ship for his rehearsal schedule, so I accompanied a tour group to Rome. There is SO much to see in Rome, that I opted for the “highlights” tour since it was my first visit. We saw Vatican City (including St. Peter’s Basilica), the Colosseum, Trevi Fountain, and the Pantheon.

Rome was awesome! I hope to return some day and see more! The next day was a long day at port in Santa Margherita. We had until 10:30 PM, and Patrick had no show, so we took a tour together to Cinque Terre. Cinque Terre is a UNESCO World Heritage Sight – chosen because of the unique and beautiful way of life that has persevered there in harmony with nature for over 1000 years. The cliffs along the Ligurian sea are dotted with these five tiny villages, surrounded by terrace farms. The terraces are cut into the cliffs where they grow grapes and olives. Fishing has been the other industry here as well. Only in the past 10 years has the tourism industry boomed in Cinque Terre. 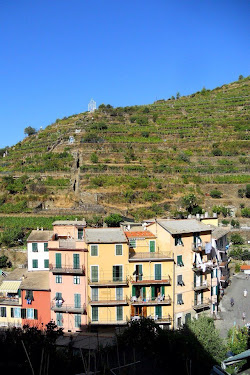 Part of what makes Cinque Terre so charming is the vibrant colors of the villages, dangling off the cliffs over the perfectly blue sea. We were told that the houses were originally painted in all different colors so that fishermen working long hours out at sea could look up, recognize their houses, and feel closer to their families and homes. 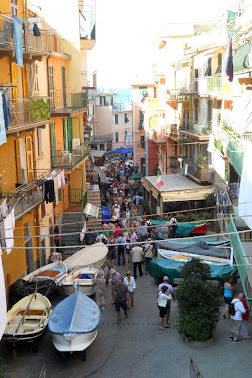 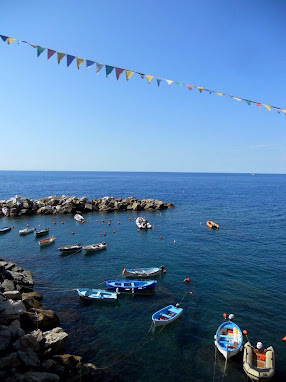 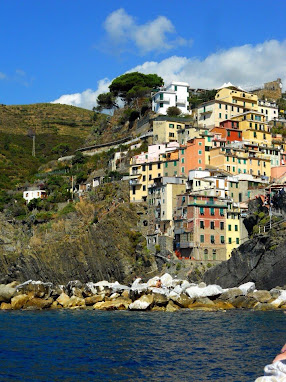 We were able to visit three of the five villages on this tour. We hiked from Manarola to Riomaggiore, then took a boat to Vernazza. We just saw Corniglia and Monterrosso from afar. In Vernazza, we had free time to do lunch on our own. We had the specialties of the region: Cinque Terre wine, pesto, and muscles. 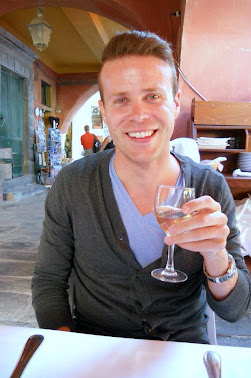 Once we headed back into Santa Margherita that evening, we still had time to explore and enjoy another traditional Italian meal. Mine included more pesto! This day was our favorite! We had a couple of “pinch me, is this real?” moments.

Our next (and final) full day, we ported in Monaco. Since I got to visit this tiny principality and Vatican City, I can say that I have been to the two smallest countries in the world in one week! We had a shorter time in port, so Patrick had to stay on the boat for rehearsal and I ventured off again on a tour that took me to Nice and Eze, France. We drove along the scenic cliff on the Cote d’Azur (or French Riviera) from Monte Carlo to Nice. In Nice, we had free time to explore. I walked through the Flower Market, visited a small cathedral, and stepped onto the beach for a moment.

Nice is really pretty, but my main intrigue on this day was the tiny medieval village of Eze. This town is another that seems to have been plopped onto a cliff and has been preserved in its near-original state. Its position on a cliff provided protection from pirates, and its ivy-covered stone walls are fortress-like. A series of narrow, winding stone pathways lead you by foot through Eze, which now host the entries to gift shops and cafes. People have vacation homes up above. Not until the 1950s did the people of Eze have running water. As I watched deliver boys carry food supplies up the steep pathways to the cafes, I thought about how slippery it would be to accidentally slosh a bucket of water onto the path, carrying it to your home in decades past.

Back on the ship that evening, I had to repack my bag, got to watch Patrick perform again, and then we had one last fun night on the ship. The last day of the cruise brought us back to Barcelona. Because I had an afternoon flight, we just explored a main thoroughfare in Barcelona called Las Ramblas, ending with lunch in a small cafe there. Then I took a taxi to the airport and was back in Munich in a couple of hours.

I will say, I was very sad to say goodbye to Patrick. We won’t see each other until he (hopefully) comes to visit me here next summer. However, I am incredibly thankful for this opportunity to get to share in this part of his life. It is good to be able to put names with faces and pictures with places when I hear from him now. I’m also thankful that he does what he does, that this crazy entertainment business takes him all over the world, and that he keeps letting me come along to visit! Keep it up, brother. 🙂 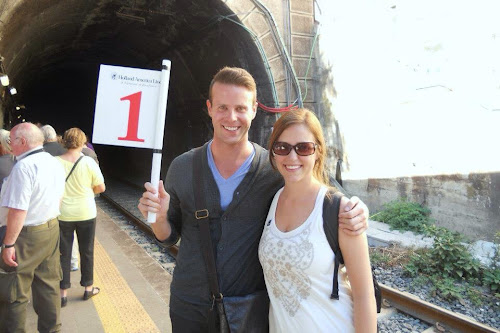 Hoping for more adventures in the future!

1 thought on “sailing on the nieuw amsterdam”