Skip to primary content
I like spring because my birthday is in April, Easter is my favorite holiday, and the world comes back to life. This spring has been especially joyful and renewing for me because of the especially long, gray winter that we survived here in Munich.

We had snow off-and-on from Halloween to Easter, and this past season holds the record as Munich’s cloudiest winter in 50 years. On the rare days the sun actually shone, it was unbelievable what an effect it had on my mood! I wasn’t especially grumpy or sad all the time, just kind of tired and subdued. Not until my spirits were lifted by blue skies and sunshine did I realize how “down” the gray cold kept me this winter.

Now it’s spring, and although weather is unpredictable here in April, just like it is back home, we have had gorgeous warm days lately. I want to share a look back at the past two weeks through some random photos of good things about spring…

My birthday! I made a rich, dense, flourless-chocolate cake and chocolate oatmeal cookies, and invited folks for tea on my birthday on April 14. It was one of the first warm sunny weekends we had – I think nature wanted to celebrate my 25th, too.

The English Garden! I’ve written about it before. The garden is laid out to mimic nature; there are finally-green fields surrounded by wooded areas, streams running through, and bike, foot, and horse paths crisscrossing the 910 acres of the garden. With the great spring weather we’ve been having, people have been flocking to the garden. 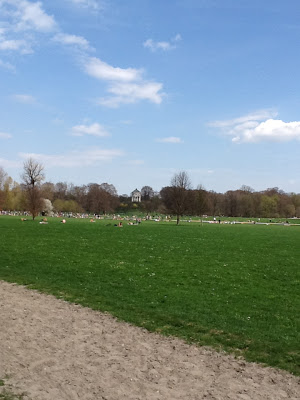 Not exactly a great thing about spring, but an interesting cultural anecdote….

In the picture above, it is too small to see, but there are scads of naked people soaking up the sun! Here’s how it has been explained to me: FKK, which stands for “Freikörperkultur,” or “free body culture” (aka being nudist) has existed as a phenomenon in Germany for a long time but was first really popularized in East Germany. Back then, the East Germans weren’t allowed to do much at all, but nudity was one freedom they had, so they played beach volleyball, went hiking, sunbathed, etc. in the buff for about 40 years. And… old habits die hard. There isn’t much stigma surrounding public nudity here (don’t think hippie orgies), although the average German university student I know wouldn’t just go strip down in the garden. Still, one should not be surprised to stroll along the field and see naked folks in their 50s-60s catching some rays.

Bicycling! My bike was in need of repairs and a tune-up after the long winter. My oh-so-capable boyfriend Julius got it back into good shape, and I got to ride my bike the 25 minutes to the Uni two times last week. It is amazing how many people ride bikes here, especially in comparison to back home where we have to drive everywhere we go. Most roads are equipped with pedestrian and bicycle lanes on the sidewalks, which makes biking pretty safe, so more bicycling is in order these days! 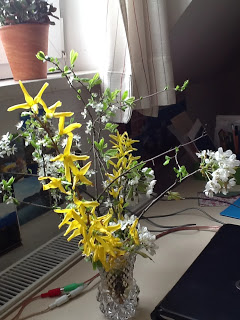 Biergarten season! Oh, how I love the German biergarten (translation: beer garden). The beer is great, but it isn’t really about the beverage as much as it is about the atmosphere. At the biergarten, you get to pick out your picnic table in the shade or in the sun, sitting with friendly strangers if the place is especially full. Everybody is relaxed – kids play on the playground, folks walk or come on bikes, sip on cool brews and enjoy traditional German food. One neat thing about the biergarten is that you don’t have to order from the menu – you can also bring your own picnic. I know of three beer gardens within walking distance from home… I think it is going to be a good summer.
A couple of recent activities of interest:
Julius and I made a day trip to Kloster Andechs, which is a Benedictine monastery located just outside of Munich. We rode the S-Bahn out to the end station in Herrsching, then followed the hiking paths for 45 minutes or an hour to Andechs. It was a good way to get some exercise and fresh air. 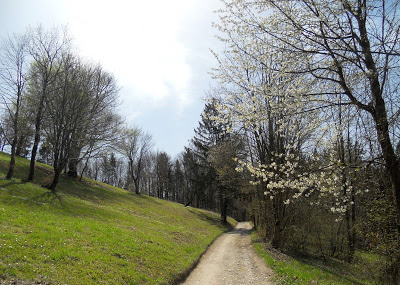 This past Saturday, the Collegium Oecumenicum played a live version of the board game, “Scotland Yard.” In the game, detectives seek to catch Mr. X, who is a criminal on the run through the underground system. We played for three hours – exhausting, but fun!

Looking forward: I am anxiously awaiting my brother’s visit to Germany! He comes May 9-19. We have planned a weekend trip to Prague and have other adventures in store as well. I have been so excited, I made a paper-chain countdown. Today I’m down to single digits – 9 days!

Before he comes, I will spend 5 days in Hamburg at the Deutsche Evangelische Kirchentage – a large convention of the German Evangelical (Lutheran) church that takes place every 2 years. Between 100,000 and 200,000 people are expected to attend. I am going as a part of my stipend group and also the Collegium Oecumenicum. I don’t really know what to expect, but I’m sure there will be something to share here on the blog.

Some friends are coming to visit later in May, en route to Northern Ireland, where they are moving for a job. My mom and aunt Gale are also coming to visit in June. It is going to be a busy summer in Germany, in the midst of the semester as well!

You wouldn’t believe after reading the amount of stuff I just posted on the blog, that in the last two weeks, the summer semester also began. More on that in another post.