No wasting time on apologies. I’m back in the blogosphere and going to do a couple of catch up posts, then I’ll try to stay more on top of things.

This post takes us back to October. Fall break for the schools in Bavaria.

Let me first back up to mid-August, though. Right after our wedding, there was just no time to jet off some place for a honeymoon. Some folks expressed pity. I didn’t really mind. Instead of spending a ton of money on a 10-day honeymoon in Europe like lots of couples, we were just moving to Europe (which is expensive enough). And, there would be time enough for a nice trip in the months to come.

Furthermore, the time following our wedding in the States was full: packing, partying, saying goodbyes, moving abroad, coping with jet lag, bureaucracy, parents visiting, another wedding reception, apartment hunting, moving in, Julius starting to teach, me starting to job hunt, etc. And the whole time, I still didn’t regret not having a honeymoon, but… let’s be honest, that’s enough change in a 2-month time span to make anyone need a BREAK!

So, fall break was rolling around at the end of October, and the funds weren’t there to take the delayed honeymoon in Italy we would have liked, but we decided a long weekend away was definitely in order. And where did this long weekend take us?

Ok, a little anti-climactic. I made tongue-in-cheek comments all weekend about “our honeymoon in Dresden,” but it was truly a lovely place to visit. Here are some pictures and an account of what we did.

It was a little chilly that weekend, but the skies were blue and the sun was shining, which was great for just walking around and enjoying the city.

Frauenkirche with the carriages waiting for passengers.

And Dresden’s city center is a baroque/rococo dream! It’s a rare specimen, where, within the center, everything fits the style. With the horse carriages queuing up in front of the Frauenkirche on the large stone-paved plaza, you have the feeling of stepping back in time. The city was heavily bombed in 1945, and most of the city center was destroyed. It became a major cultural center in East Germany, a city well-known for its opera and art. After reunification, Dresden was pumped with tons of money for reconstruction, an effort which still continues today. 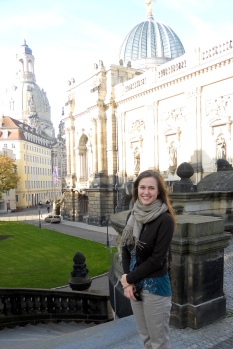 We were there for 4 days, 3 nights, and we planned to do a few “big things” – taking in some of the high culture Dresden has to offer – but mostly to take time for relaxing, strolling around town, sitting on the river bank, eating good food, etc.

We got tickets to an evening concert in the Frauenkirche: Mendelssohn’s Elijah. Wow! It was impressive. We also spent an afternoon in the Galerie Neue Meister, where we greatly admired the Caspar David Friedrich collection.

I guess we were some of the younger concert-goers? 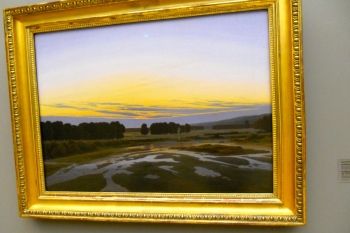 Caspar David Freidrich called Dresden home – their collection there may be one of the largest.

Tanking up on Vitamin D!

“Old Dresden” lies on the south side of the Elbe River, and crossing over one of the bridges takes you to “New Dresden,” a less-touristy, more-lively, edgier part of town with its own less-picturesque kind of charm.

Night view over the Elbe onto the Altstadt (Old city). Ok, truly romantic.

Looking over to the Neustadt (new city) from the Brühlsche Terasse, we watched this hot air balloon for a long time, as it inflated and rose into the sky.

In the Neustadt, I really enjoyed the Kunsthof-Passage, a series of courtyards filled with artisans’ shops, clothing stores and cafes with a hippie vibe, where the buildings themselves are works of art.

We stayed in a great location in the baroque-styled Altstadt right over the Münzgasse, a lively part of the city with a hopping, touristy night life. At the Aparthotel Münzgasse, the stay was affordable, the reception was friendly and helpful, we had a suite with our own kitchen, so we could eat breakfast and occasionally a second meal in. The place was clean and central, but the noise from the busy restaurants below did float up to our window until late hours. It was great to be just a stone’s throw from Frauenkirche.

We ate well in Dresden, too! We really didn’t pick a bad place. Our main criteria? Vegetarian-friendly. Here are my choices:

That’s all, folks. I recommend a visit to Dresden. In October, the city isn’t over-crowded with tourists, the weather can be delightful, the place is really enchanting… and at the end of May, I’ll still be taking that “delayed honeymoon” to Italy.