Munich is a city with art. In my previous year living in Munich, I had been to both the old and new Pinakothek art museums on multiple occasions and was overwhelmed by the size of the collections housed there. Sensory overload is inevitable. In such a large museum, I tend to take my time at the beginning, but an hour in, I start to walk more quickly, observe less closely and, ultimately, I don’t really see the art that comes later in my visit. After a 3-hour art museum visit, some highlights stick out in my memory, but regarding most of the artwork, I’m unable to say much other than “it was pretty…” Well, it turns out that this isn’t the best way to experience art. You just can’t see it all in one visit, and you shouldn’t try to. (My husband would argue that you can spend an entire museum visit sitting at one painting.) We recently visited an art museum in Munich that I hadn’t been to before: the newly renovated Lenbachhaus. The floor plan of the Lenbachhaus doesn’t draw visitors through a tour of the entire collection of centuries of artwork, but rather invites you to focus on an area of interest. So, no traipsing through the entire 19th century gallery to get to the specific 20th century collection you actually came to see. 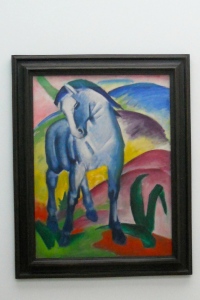 And if you’re visiting Lenbachhaus for the first time, the collection to see is Der Blaue Reiter — The Blue Rider. Der Blaue Reiter was a group of early twentieth century artists centered in Munich, and the collection at the Lenbachhaus, acquired in 1957 from one of the artists herself (Gabriele Münter), is the largest Blauer Reiter collection in the world. This is “local art” — first exhibited in Munich a century ago, seen today in Munich at the Lenbachhaus. The subject matter is also not far from home. Several of the artists painted together in Murnau, a Bavarian village about 70 km south of Munich early in their careers. I was most drawn to Kandinsky and Münter’s vivid, colorful works from Murnau. END_OF_DOCUMENT_TOKEN_TO_BE_REPLACED