The 2014 Oktoberfest has come to an end, and the stats are in!

As reported by Bayerische Rundfunk (BR), this year 6.3 million guests attended and consumed 6.5 million liters of beer, 48 calves and 112 oxen. They smuggled 112,000 mugs out of the tents. There were 2,205 police interventions at the Oktoberfest, but the police seem happy to report that they intervened proactively, which prevented many criminal offenses this year. The Bavarian Red Cross stitched up 700 wounds and treated 600 patients for alcohol poisoning. BR reports that guests traveled to Oktoberfest from all over the world, mostly from Australia, USA and Italy, but also in large numbers from Egypt, Chile, India and South Africa.

Munich residents are breathing a sigh of relief today that the millions of guests have gone home again. It’s hard to play host to that many people for two whole weeks. (It’s also hard to board the subway and have to stand with your nose 5 cm away from someone’s armpit.)

Because we’ve just moved and have been living out of boxes during this time, the last thing we needed was more commotion in our lives. Nevertheless, we were invited to join some friends at Oktoberfest, and we were happy to trade the chaos at home for a different kind of chaos at the Wiesn for one afternoon! 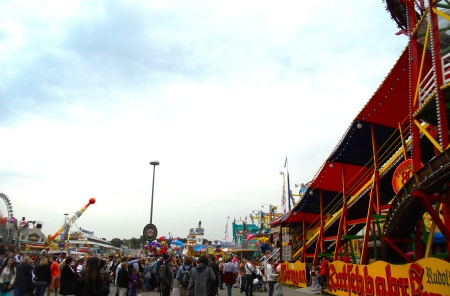