A let a lot of time go by between posts, and to rectify the situation, I’m attempting to offer a few catch-up posts.

Since the last time I wrote, the weather really changed from fall to winter. We’ve had a lot of cloudy, foggy days, white skies, and a few big snow falls. (I had to buy new boots, since I found out the hard way that mine were not waterproof!)

The first big snow in December – and our neighbors’ cute snow man.

At the end of November, Munich, like many German towns and cities, was taken over by the Christmas markets. 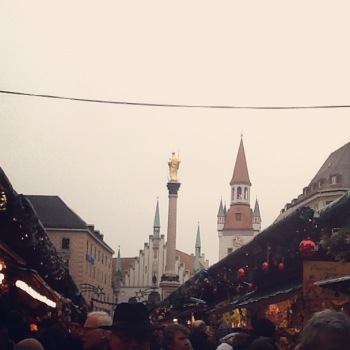 We celebrated Christmas in the tradition of many (most?) Germans, with the main event on Christmas eve night. That’s when Julius’s family eats a big meal together, attends church, reveals the decorated Christmas tree, and exchanges gifts. Christmas day involves gathering with extended family and more eating, but the “big day” is the 24th.

In an attempt to offer a favorite US Christmas tradition, I made (and Julius stuffed) stockings for his family. I got the idea a little bit late in the season and literally spent hours per day, days on end in a crocheting frenzy. But in the end, everyone had a hand-made, personalized stocking, filled with goodies, which Santa Clause brought during the night and placed by the tree as a surprise for Christmas morning. 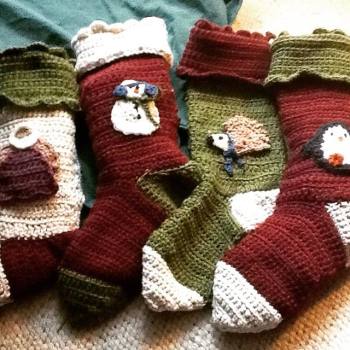 Just a week later, we were ringing in the New Year with Julius’s sister and her fella and some of their friends. In Germany, Sylvester is the big holiday for fireworks! Rather than professional, coordinated displays, though, the fireworks are shot off by everyone on the block, haphazardly streaking the sky with flying fire… it’s kind of scary, but also fun. 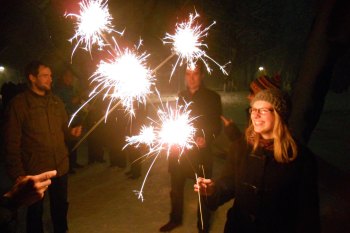 We were tame and just lit sparklers.

And January 1 was a marvelous day with clear blue skies and a beautiful white blanket of snow on the ground. 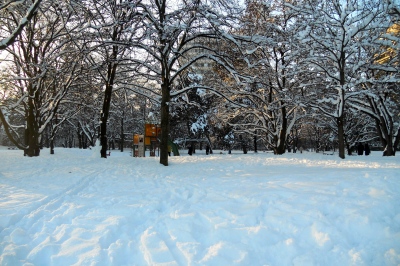 Also throughout December and January, I was also going through a series of interviews for a job. This was a bit of a tenuous season, with one interview after the other over several weeks (for a total of 3 interviews!), but in the end, I was hired to be the Landesjugendreferentin for the Gemeindejugendwerk Bayern. Translation? Titles are hard to translate, but I am a consultant? specialist? let’s say, “person responsible for” youth work in the Bavarian youth ministry office (GJW Bayern) of the German Baptist Union (BEFG).

Basically, I work on supporting, training, and providing pastoral care for professional and volunteer workers in youth ministry; contributing theological, biblical, pedagogical content for retreats, camps, other events; and then planning and carrying out these events. The GJW works on a state level, in Bavaria, to support youth workers and groups in their congregations and to bring youth together across the state at camps, retreats, and trainings.

The gig is for one year, as a maternity leave replacement position, but I’m hoping to learn as much as possible in this one year as I can about Baptists in Bavaria and all of Germany. I’m already really loving it, getting to know really great people who are passionate about God’s kingdom, and I am energized about the work of GJW! It’s a 3/4-time job, so I can also keep on doing my other internet-based work, editing www.d365.org.

Bouquet from the GJW Board after they voted me in!

It’s interesting – no, to me, amazing – how within my first 6 months of being in Germany I ended up with these two great opportunities for ministry (d365 and GJW), where I feel like I’m really putting my experience and degrees to use. I expected to hunt for a job for a year in Germany before anything fitting came about. One of the hardest parts of moving overseas has been the loss of a professional network. And in Germany, there are just so few Baptists. So I was incredibly grateful for the opportunity to work for d365, which I began in September. But within 2 months of getting my work permit in Germany, I was applying for the job at GJW and starting to work 6 weeks after that.

I had some good people thinking about me and helping me get connected. God is good. God provides. I am thankful for this new season.